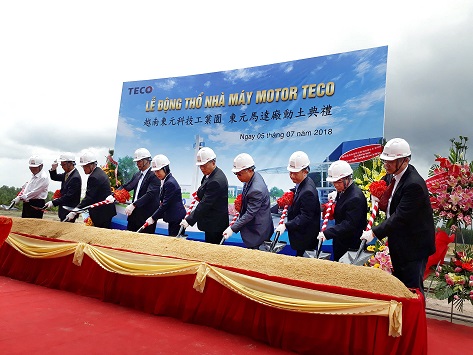 In response to the government's New Southbound Policy, TECO Electric & Machinery broke ground on its Vietnam small-motor plant on July 5, which is scheduled to start mass production in April 2019.

Sophia Chiu, TECO chairperson, noted at the ground-breaking ceremony that with targeted capacity reaching 300,000 motors a year, the plant will be a key production base of TECO Group in Southeast Asia. Built on a own plot of land spanning 4.2 hectares in space in the KCN My Phuoc III Park in Binh Duong Province, the plant will become the centerpiece of the "TECO Vietnam Technology Park," which will be developed by the company in five stages and targets soliciting US$160 million of investment funds.

"The plant will become TECO's third major production base in the region, joining the existing two, in Penang City of Malaysia and Dong Nai Province in Vienam, respectively," pointed out Chiu. TECO reported that the plant will embrace automated continuous production, turning out high-efficiency industrial motors, for supply mainly to Vietnam and other Southeast Asian nations, plus North America, Australia/New Zealand, and Europe. It will employ an environment-friendly process, such as the usage of water-based paint, capable of slashing VOC (volatile organic compound) emission by 90%.

Developed by state enterprise Becamex Group, the KCN My Phuoc Park is 50 kilometers north of Ho Chi Minh City, near harbor and international airport, consisting of a series of five industrial areas. TECO secured a plot of land spanning 50 hectares in space in the KCN My Phuoc Park III 10 years ago for US$10 million, the largest investment for the industrial area, and will develop the land into a hi-tech park in five stages, which will consist of several sub-areas of factory, logistics, R&D, office, dormitory, and daily-life facilities, complete with such business facilities as commercial center, hotel, conference room, and convention center. It targets soliciting over US$160 million of investment funds before its completion by 2027.